Recently, by chance and then by continued interest, I’ve been writing a lot about beer. I think its a topic I’ve stuck with partly because I love talking with brewers — this is a crowd with a true passion for their craft. The more brewers I talk to the more this is confirmed.

I decided to start a little series on the blog focusing on these craft beer geeks. But not every home brewer takes it from passion to profession or to owning their own brewery. So, my question for them was how did they make that leap? Where did they get the courage? What was the tipping point that made starting their own brewery an inevitability instead of a pipe dream?

Here is my first answer:

I first met David Marshall, owner and master brewer at Burwood Brewing in Walla Walla, Washington, over email for a story I was writing on decadent dining for a local magazine. I had emailed him a quick question, looking for his choice of a decadent beer to add to the list. When he responded with a page-length reply giving me a description of the beer along with its cultural history, I knew this was someone passionate about beer, and I knew I needed to talk to him more. Over the last year I’ve had that opportunity. It has been a treat to learn from his wealth of knowledge on the subject of German beer.

Marshall has worked in various roles in the beer and wine industry for the past twenty years, but only in the last three has he owned and operated his own brewery.

“At some point someone asked the question ‘Are you happy working for a winery?’ And I knew that wasn’t really where my passion was,” Marshall says. Before going back into wine, Marshall had spent the last seven years with Pyramid Brewing Co, ending as their master brewer. But he began feeling disenchanted with the brewing industry at the time, specifically the way the board was driving the direction that felt a little too corporate. He wanted to get back into a more hands-on role. 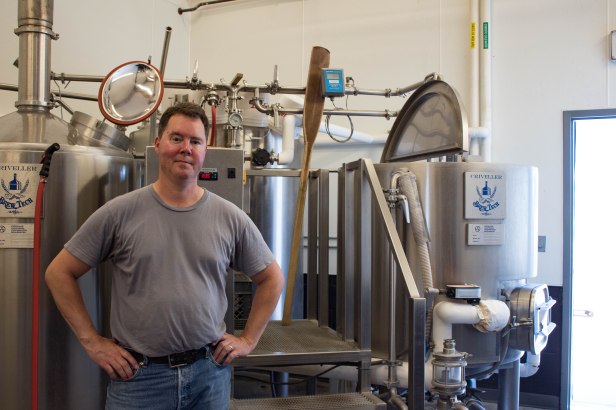 “I gave wine ten years, but it never really held my passion like brewing has,” Marshall says. “And I wanted to be part of something, actually making it versus sitting at a desk.”

He and his wife moved to Walla Walla with the idea of someday starting a brewery in the small Eastern Washington wine town. While working for a local winery as their assistant winemaker, he began developing recipes through homebrewing and making a business plan.

“I always had this fascination with beer,” he says. “I would read books about it and they would always hold my interest, but I never really found that with wine.” Marshall, who has a degree in German, has been to Germany to study the beer style he loves. “I went there to get an understanding of what those beers taste like from the source, fresh,” he says.

Burwood met with success early on, and just moved from their small incubator facility to one that will allow them to go from 400 barrels a year to 1,000, with room to grow. Their new tasting room and production facility is located just down the road from their old, with big bay windows and lawn overlooking the wheat fields and Blue Mountains of Walla Walla.

Read Burwood’s full story here, and more about the other budding breweries in Walla Walla here. And stay tuned for Part 2 in the series on taking that leap of faith to follow your passion (and the steps in between).

One thought on “Craft Brewers on Turning Passion into Action, Part 1”